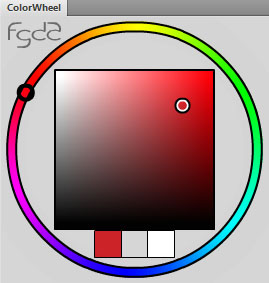 A color selection panel written by me for Photoshop.
Current version is 1.1 (from October 2010).

I spend a lot of my time painting digitally in Photoshop and I always wanted to have a color selection tool like the one used in Corel Painter. Hue sliders in Photoshop just weren't the answer - it had to be a color wheel. There were some options I could buy, like the MagicPicker, but it was also doing a dozen other things beyond being just a color wheel and it didn't even display the gradients in the color selection correctly. Also, nothing really beats the experience of writing something on your own.

I have written this scalable ColorWheel panel in Flash and tested it in Photoshop CS4. It should also work CS5, but not in CS3. Whether it would work on MacOS is a great unknown. This plugin is kept as simple as it gets - it allows the user to set foreground and background colors and automatically updates itself if the color was changed using a different tool.

Why is there a square selector inside and not a triangle like in Corel Painter?

It just can't be done right using flash and two linear gradients (white-to-color and transparent-to-black - that only works fine in case of a square). To fill a triangle like Painter does, it would require you to multiply two angular gradients, but flash doesn't support them. Have a look at a picture of MagicPicker or look at the comparison of gradient fills below. Along the left side of the monochromatic triangle the color should flow from white, through grey, to black, but that's obviously not the case with just linear gradients. The color is slightly saturated. To make things right, one would have to compute every pixel "manually" which, when written in Flash, is a complete waste of CPU time.

By the way, for me a rectangular selector feels more natural, because it operates orthographically. I know that to make the color darker (i.e. add black) I have to move straight down verlically, whereas in a triangular selector I'd have to move down and sideways towards the black vertex.

Doesn't Photoshop CS5 already include a color wheel?
Yes it does, finally! However it is a modal version (appears only on demand) and it didn't exist in Photoshop CS4, which was the version I had when I felt the urge to write the ColorWheel panel.
Does it display ads or make internet connections?
No. It does not connect to the internet, it does not look for updates or inform you about them, it doesn't display any pop-ups and the only ad, if you can call it that way, is my logo in the top left of the panel.
Could you add HSV/RGB sliders, web color codes and other features?
Negative. The panel was intended to be as simple as possible. For changing RGB values and putting in hexadecimal color codes you should rather use the default color picker.
Are there any known bugs?
The only thing I've noticed is that it doesn't always register current color changes when you pick color from the Samples palette and I haven't figured out how to release focus after you've changed colors using ColorWheel. At the moment focus is released by clicking anywhere in the Photoshop window.
How does it work?
It works in a similar fashion to the default color picker, but instead of a hue slider you get a wheel, which is historically a more natural way of representing hue. The rectangular area filled with monochromatic color looks exactly like what you have in color picker, however it adds a little more functionality. When you move your cursor over it you get a live preview of the color underneath in the box below and can compare it to both foreground and background colors. Pressing Ctrl makes all changes affect background instead of foreground (move the mouse to see it). Furthermore, pressing Shift allows you to constraint color selection orthographically and only change saturation or value at once. A graphical explanation of ColorWheel components is provided in the image below. 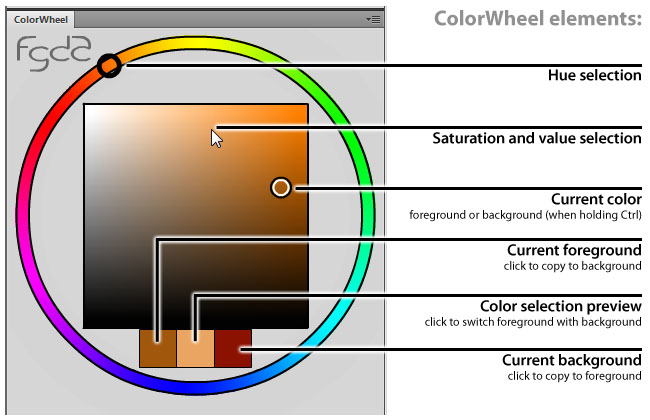 Current version of ColorWheel is 1.1 (from October 2010). If you have an older one, you may consider replacing it. Installation instructions are following:

I hope ColorWheel proves as useful to you as it is to me, but I can't promise or guarantee anything. You may install the plugin on as many computers as you wish and use it for both free and commercial work. You should not redistribute it further but instead provide a link to this download page (http://fgda.pl/colorwheel, for as long as it exists). Any feedback from you will be much appreciated (and could be posted on this site if you express no objections).